Marketing cookies are used to track visitors across websites. The intention is to display ads that are relevant and engaging for the individual user and thereby more valuable for publishers and third party advertisers.

Cookies are small text files that can be used by websites to make a user's experience more efficient.

The law states that we can store cookies on your device if they are strictly necessary for the operation of this site. For all other types of cookies we need your permission.

We use cookies to personalise content and ads, to provide social media features and to analyse our traffic. We also share information about your use of our site with our social media, advertising and analytics partners who may combine it with other information that you’ve provided to them or that they’ve collected from your use of their services.

You can at any time change or withdraw your consent from the Cookie Declaration on our website.

We congratulate Helmut Hoffmann on the Oskar Patzelt Foundation’s Grand Award for his life’s work and are proud to have him as the successful leader of our company group.

With tinkering spirit he supplied the GDR household with small luxuries and, on top of that, saved water and energy while conserving resources: in the mid-1980s, Helmut Hoffmann from Falkenberg built the egg boiler of the GDR. And even today the 79-year-old is still a busy entrepreneur. With his company Elektro- und Schaltanlagenbau Uebigau, in short uesa GmbH, he is one of the most important employers in the region with about 1,000 employees. This year, the Oskar Patzelt Foundation awarded him the Grand Award for his life’s work. 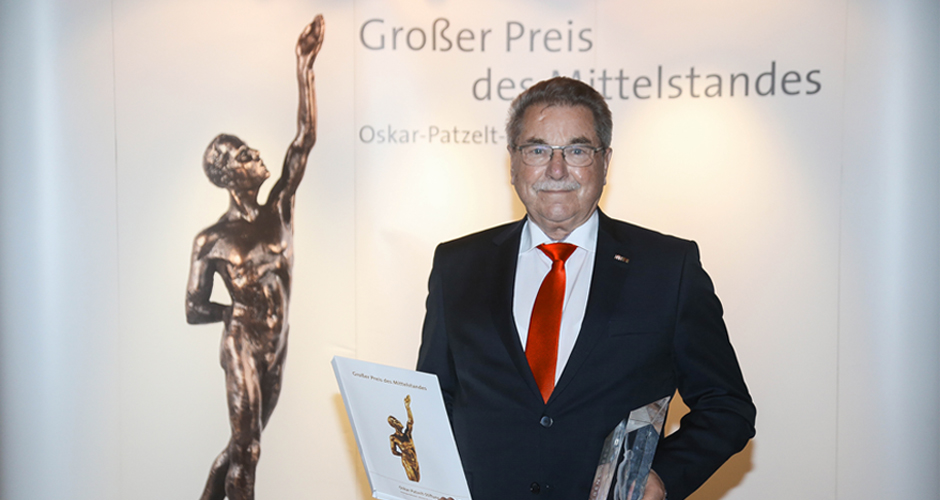 His father was once presented with an egg boiler from Germany’s West, which the curious Hoffmann disassembled. Due to a lack of resources, it was not possible to think of a complete copy, so Hoffmann had to be inventive and acquired the necessary materials from associated companies. At first, many people probably smiled as to whether such a luxury product should even find its way into the kitchens of the GDR. However, at a 1985 trade fair in Cottbus, Hoffmann was able to show that the egg boiler – calculated for an entire city – offered immense potential for saving resources. According to his calculations, Cottbus saved a whole school gym full of water. As a result, the finished egg boiler became not only a popular GDR product, but also an export hit.

After the German reunification and beyond nationalization, uesa GmbH developed into an extremely successful medium-sized company. The main and subsidiary companies of the group design, plan, manufacture and install electrical equipment for industry and energy supply. The range of services includes power distribution systems, cable distributors, transformer stations, low and medium voltage switchgear as well as automation and control systems. Not only are the company and its products successful locally, but also through its subsidiaries in Poland, Russia and Mongolia. Hoffmann’s innovative spirit is constantly opening up new customer segments. With the acquisition of further subsidiaries, uesa GmbH is meanwhile well established in the field of regenerative energies.

Since 2006, uesa GmbH has been nominated ten times for the Grand Award. In 2007, the company was honored as a „prizewinner“, in 2018 as a „premier“ and now it is honored for its life’s work. The Grand Award of the Oskar Patzelt Foundation is considered Germany’s most important business award for medium-sized businesses. Since 1995, the nationwide award has been presented to outstanding companies that are not only economically successful, but also stand out for their dedicated customer service, innovations, the creation and assurance of jobs, an exemplary working atmosphere and broad-based employee training, as well as social and community involvement.